Wow. Apparently it has taken a government directive to get myself back in the habit of writing regularly. I feel fortunate and grateful every moment of each day. I am surrounded by people (at a safe social distance, of course) who find the positive despite all of the terrible things unfolding every day. Sometimes, actually, every hour.

I don’t know what day number of the quarantine this is. I am not even sure I know what actual day it is. As I debated what to make for dinner this evening, I found myself reflecting back to Day Number One of the quarantine. It was a weekend, which made the reality of the situation that much less “real.” The gravity of it all had certainly not been (if it even has yet) been realized.

On Day Number One, one of the critics I employ on occasion decided to venture out of the norm in The Scullery. Our kitchen is one that routinely turns out Mexican food, Italian food, and often some random recipes shared with us by fans, friends, and family. Today, the young critic announced, we would be visiting a lovely part of the world situated about an hour from the Black Forest. Stuttgart, Germany. Home of the Käsespätzle.

“It’s basically German mac n’ cheese,” our young critic told me, which did not give me high hopes. I like mac n’ cheese, don’t get me wrong. At one time in my life I would venture to say I loved it. But the visual I get doesn’t necessarily lend itself to eclectic. And the description does not actually do justice to the dish. Not in the least. This dish does NOT resemble mac n’ cheese with the exception of the idea that there are noodles. And there is cheese.

But they are not “noodles noodles.” They are spätzle. And it’s not just “cheese.” It’s Gruyere. It’s Jarlsberg. It’s mouth-watering, much lighter than you’d imagine, and it’s even good the next day. I need to give the critic’s Küchenhilfe the credit she’s due for her expert cheese shredding and always entertaining conversation and humor throughout the process. I am quite sure the dish became a masterpiece with her touch added. Definitely worth the effort, and goodness knows I have extra time on my hands right now. Guten Appetit! 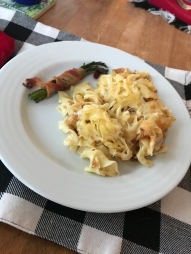 View all posts by Hillary Danaher