Here is the repeat winner from The Scullery’s “Best Soup” category…it never disappoints! 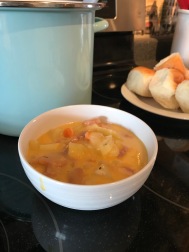 Instructions:
Using your soup-making pot (I think mine is 5 quart) melt the butter over medium-low heat, then saute the onion and carrots in it for about 5 minutes. It’s important to keep the heat pretty low throughout this process, otherwise when you add the cheese in just a few more steps, it curdles when you dump it in…which still makes a salvagable soup but you have to do a lot of damage control.

Stir in 2 cups of milk (yep, you’ll have the +1 leftover), bouillon, salt and pepper. Combine the flour and the other cup of milk in a bowl and stir until its smooth. Stir the flour/milk mixture into the soup, allowing time for it to simmmer again. As it thickens, reduce the heat and add the cheese and ham. Stir until the cheese is melted. Remove the soup from heat and serve it up! Goes nicely with a baguette.

A River Runs Through It
Hot Oat Cakes with Blackberry Sauce ❤️
Love ❤️
High Tea at the O. Henry Hotel
Lessons from a seahorse ♻️